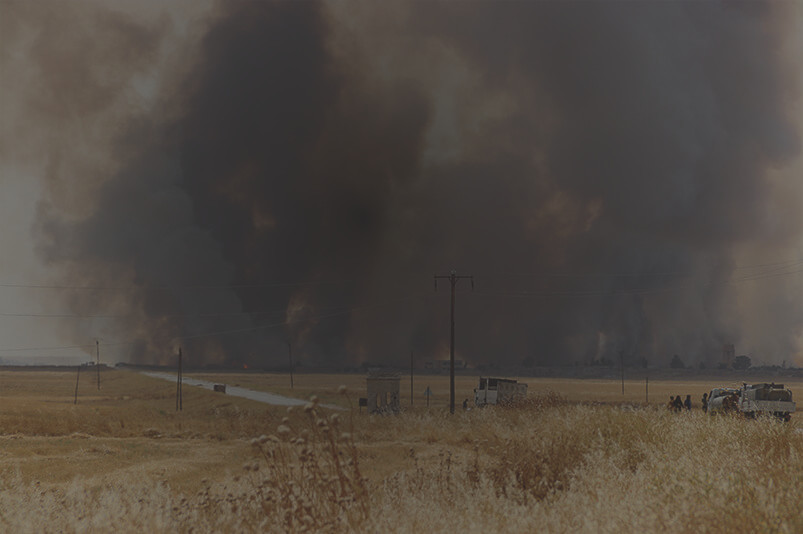 For the recently announced new invasion we have to expect chemical weapons attacks of Turkey!

Already during the Turkish invasion of Serêkaniyê in 2019 the Turkish state used chemicalweapons, including white phosphorus and napalm. 33 people were burned in this attack. Nature is being harmed and transformed in the long run.

“Effects of chemical weapons on nature and environment continue for decades. Fruit trees cannot yield their normal products. Chemicals even affect stones in seas and rivers. Chemical weapons not only damage the area in which they are used, but also the surrounding area. When they penetrate into surrounding plants, they affect the entire environment.” – Mistefa Kihel, Rojava University Chemistry Department lecturer

Not the 1st time Turkey is using chemical weapons

Also now, since April 14th 2022, the beginning of the current invasion in southern Kurdistan, Turkey is using phosphorus bombs and other chemical weapons against the Kurdish guerilla, killing people and damaging nature long-term. In this operation the Turkish army has already used chemical weapons and toxic gas 323 times in 6 months! And the war is continuing…

The Turkish state has build several dams in their territory, cutting off the water supply for Syria. The rivers Euphrates and Khabur, which originate in Turkish territory and stream south through Syria, are the main water suppliers for Rojava in terms of drinking, irrigation and generating electricity.

Last moth the SOHR warned of an #environmental catastrophe threatening food security and humanitarian crises which pose a threat to nearly 2.5 million people!

“Our regions depend by 99% on the Euphrates River, so Turkey’s exploitation of the situation and cutting off the water is an attempt to displace the population, especially since water is the main element.” – Amna Al-Salem, co-chair of Directorate of Agriculture in Hajin, Deir ez-Zor

Turkey has been digging many wells in North-Kurdistan during the past decades, which has lead to a radical groundwater level drop, affecting also the groundwater of Rojava.

Only a few years ago groundwater could be extracted at a depth of 100 meters. Now it has dropped to 150 meters.

As a result, also the rivers in Rojava are running low on water, which has contributed to the dying off of forests along the river banks.

Purposely setting fire in Rojava is one of the methods of Turkish warfare. Agriculture is the main source of income in the region and is systematically being attacked.

Especially in 2019 and 2020 the Turkish state and ISIS burned hundreds of thousands of hectares of land at harvest time to damage the economy and environment of the region.

Often the fires were started by targeted artillery. Other times the hidden ISIS cells would put reflecting lenses into the fields to start fire.

Since the invasion in Afrin the Turkish state, with the help of it’s jihadist groups, cut off already hundreds of thousands olive-trees to sell them as wood in the market.

Reports from last year counted more than 1.5m trees that have been cut down in the past 3 years. 12.000 trees have been burned down.

Not only in Rojava, also in the other parts of Kurdistan, Turkey is using the destruction of nature as a special warfare. For military operations in northern and southern Kurdistan Turkey is cutting and burning down forests to build military bases and to take away the protection of the Kurdish guerilla.

The Turkish government is promoting the spread of pests from agricultural land in Turkey/North-Kurdistan to Rojava, using chemicals that don’t kill the pests but push them south into the nearby fields in Rojava.

The people in Rojava are missing important machines and equipment to process their own resources. The key-parts are not let through the borders, because the Turkish state is putting a lot of pressure to the surrounding state’s to enforce an embargo onto NE-Syria.

This is preventing the farmers from processing their harvest.

To develop a more ecological energy-supply is also made difficult, since solar-panels are hard to get or to produce, replacement-parts for the hydro-power turbines are missing and the existing oil-pumps can not be renewed to work cleaner.

Everything that would lead the region to be more self-sustainable and more ecological in the economy is blocked at the borders.

“We didn’t realize this at first, but its global,” says Turkish forest defender Tuğba Günal. “If you want to protect the environment, you are treated as a terrorist. It’s everywhere now.”

The Turkish state is putting high sentencing on activists, sometimes even years of prison for peaceful actions and organizing. The Turkish president Erdoğan sees everyone fighting against his large-sized environment-destroying project as “traitors on the nation” This also prevents the people in northern-Kurdistan in the territory of the Turkish state to fight in solidarity with the people in NE-Syria!

“That was a shock,” said Erkutlu. “It was a message to environmental defenders that you can be killed and nobody will be punished.”

How much ammunition, explosives and gases harm our air and our water is not even fully understood. For sure is that this enforced state of war by the Turkish state leads not only to the direct killing of humans, but also through poisoning the nature around us.