Agriculture in a revolution 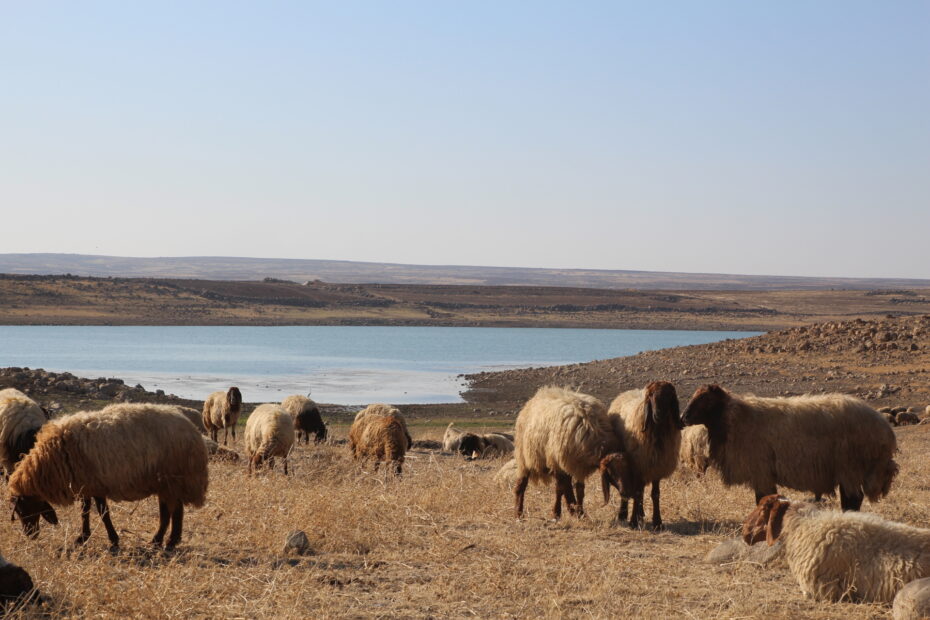 In the beginning of the year we visited the Leadership of Komîteya Çandinî Kantona Qamişlo (Agricultural Committee of the Council of Canton Qamişlo) and asked them some questions about their work.

What is your organisational structure and work?

How has agriculture changed since the revolution?

We cannot provide statistics how e.g. the area of wheat monocultures has developed. There is a general difference in agriculture before the revolution and now. Before the revolution the Syrian Regime managed agriculture and animal farming. Canton Cizire was dominated by wheat monocultures. The peasants were not allowed to plant anything else but wheat. The regime gave the seeds to the peasants in the beginning of the year and collected the harvest at the end of the year. This made peasants dependant through indebting them for the seeds, etc. The peasants had no rights in decisions. This has changed completely. Peasants now have a say. The peasants’ union has been established, in which all peasants are organised. There the peasants can influence decision-making and voice their opinions and ideas.

Each year we give out a plan what to plant in the coming year. The plan is developed according to the needs for production and professional ecological considerations regarding crop rotation for soil nutrients and soil health to get away from monocultures.

How do you integrate ecological interests in decision-making?

We have own professionals for all relevant fields including ecology. This is important for being able to do everything by ourselves. In all cities and districts we give yearly educations for local peasants on protection of the earth. These educations cover which chemicals to use and how to use them and how to deal with animals and animal sicknesses. E.g. one chemical is usually spread by airplanes, but since we do not have airplanes, we spread it by hand. Before the revolution there were considerably higher numbers of livestock, because jihadist gangs stole many farm animals and destroyed infrastructure. We take care how to treat and medicate farm animals. A success is that we have a new effective animal medication. Our goal is to produce animal medication by ourselves and to increase the number of livestock to the level before the revolution.

Why do you focus on increasing animal farming instead of vegetable farming?

Animal farming is not more important than vegetable farming. We just want to restore in animal farming what has been lost in the war, so that prices for animal products will not get too high due to imports. The goal, which is included in this year’s plan, is to produce all vegetables consumed in Rojava nationally and we are already close to reaching this goal. But getting the required material for it is difficult due to the embargo. The heavy inflation of the Syrian Pound has rendered imports even less accessible.

How do you coordinate and plan the agricultural production with the other parts of the economy and society?

It is a challenge to coordinate the production with the needs of society and the agricultural production with subsequent steps of food production like processing wheat to bread and pasta and vegetables and fruit to conserves. Agricultural and industrial production must go hand in hand and complete each other. It is a question of how much the coordination between different committees has been developed. How well we are able to satisfy our own needs depends on our ability to coordinate. All parts of the economy are connected and planned together. A good level of coordination and production has been reached.

The planning process is complex: At the end of the harvesting season in autumn, a three day long yearly meeting takes place to evaluate the production and problems of the past year. All agricultural collectives present their reports at this meeting. On this base the production for the coming year is planned. The yearly earth plan states how much of which crop shall be produced in the coming year. It considers the needs of the people and the needs of the soil, so that the soil can recover and is not depleted of nutrients. The small-scale peasants as well as cooperatives and industrial facilities make their plans for the coming year, which are coordinated in the final economic plan for the year.

How do you fertilise the soil?

We aim to phase out chemical fertilisers like ammonium nitrate and replace them by natural fertilisers, because people get ill from agrochemicals and high amounts of conventional phosphate and nitrate fertilisers damage the soil. But we cannot give up chemical fertilisers yet, so we try to minimise their use as far as possible this year. We have a laboratory and ask the peasants to provide soil samples to professionalise farming. After the analysis of the soil samples, the peasants receive the information how much fertiliser their soil really needs in order to avoid over-fertilisation.

Sheep and cow manure should be increasingly used as natural fertiliser. A corresponding project will start soon. The factory and soil are ready, but the foreign professionals to teach the local workers have not arrived yet. The general economy structure of the self-administration (Aborîya Giştî) is developing a bigger project to separate and recycle waste in cities, which includes composting urban organic waste to produce fertile soil for agriculture.

The goal is to restore soil health by planting appropriate crops in rotation. Chickpeas, lentils, beans and soy are included in crop rotation schemes to naturally fertilise the soil. The success in overcoming chemical fertilisers will also depend on the education of the peasants, so that they are convinced from planting according to the earth plan and do not only focus on maximising their yield but also consider the needs and health of society and the soil. Most peasants follow the earth plan.

How do you collaborate with the peasants?

Do the peasants accept the decisions of the self-administration?

How is the ownership of the agricultural land distributed?

Before the revolution, around 30% of the land was privately owned either by small-scale peasants or rented since decades by them. Some peasants still pay rent to the formal landowners according to the Syrian state’s law, others have stopped paying. 65-70% of the land belonged to the Syrian state and much of it was also rented to peasants. Vacant land is given to poor families. The self-administration supports all these peasants to stay on their land without paying rent and provides them what they need – seeds, an earth plan and education. The self-administration holds about 2-3% of the land for seed banks and research. A committee researches, selects, propagates and distributes well-adapted seeds to the peasants.

Is there a tendency of peasants to give up their land and move to cities?

The urbanisation tendency of people leaving rural areas exists worldwide, also in Rojava. Some people moved to cities, but still work their land on the outskirts. Since the revolution fewer people have moved to cities. For hundreds of years people have had a strong connection to the land. Due to the economic crisis and the heavy inflation of the Syrian Pound, peasants connect to their land stronger again, since the value of having one’s own land and producing one’s own food becomes more apparent in times of crisis. The self-administration’s support for peasants also counteracts the urbanisation tendency.

Which problems are you facing in agriculture?

We are facing several problems. Our greatest challenge is to change the mentality of the peasants so that they understand that we are their friends and work in their interest. We must conduct research to find seeds adapted to climate change, e.g. cotton seeds. We must build wells to provide water for people and irrigation of fields. We must reconnect peasants with their land and revive village life and self-sufficiency. Village communities producing vegetables, milk, cheese, eggs, etc. by themselves are key to becoming really autonomous. This needs a long-term approach and helps to avoid imports paid in dollar and to overcome the restrictions by the embargo. In the future we want to develop contacts and dialogue with international agricultural committees and research institutions to learn from each other. Building these connections will enable us to overcome limited international access due to the fact that the self-administration is not a state.

How could internationalists support you?

Internationalists could contribute to locally adapted seed banks with research on which crops to grow. They could work on natural fertilisers and ways to replace harmful imported agro-chemicals. They could establish international scientific collaborations. Water professionals could advise and teach us on how to design irrigation systems and how to restore the existing dams and irrigation channels built thirty to fourty years ago.

How is your practical work related to the theory of social ecology?

Regarding the connection between ideology and practice we have to talk about many things like the life of the peasants in general and peace in the families. Do the peasants take the production into their own hands? Can they reduce the dependency on traders? Do they have a direct contact to the self-administration without any intermediaries? The peasants can voice their opinions and critiques and elect their administration. The structure is getting democratised. We educate and conscientise the self-administration and peasants in a scientific way. We don’t make any difference between people, but support everyone equally. There are many enemy forces, there is war, but we keep strengthening the peasant’s work. They see this and it makes our unity stronger.