From the Zad de la Colline in Switzerland to Rojava – Fight Turkish Fascism ! 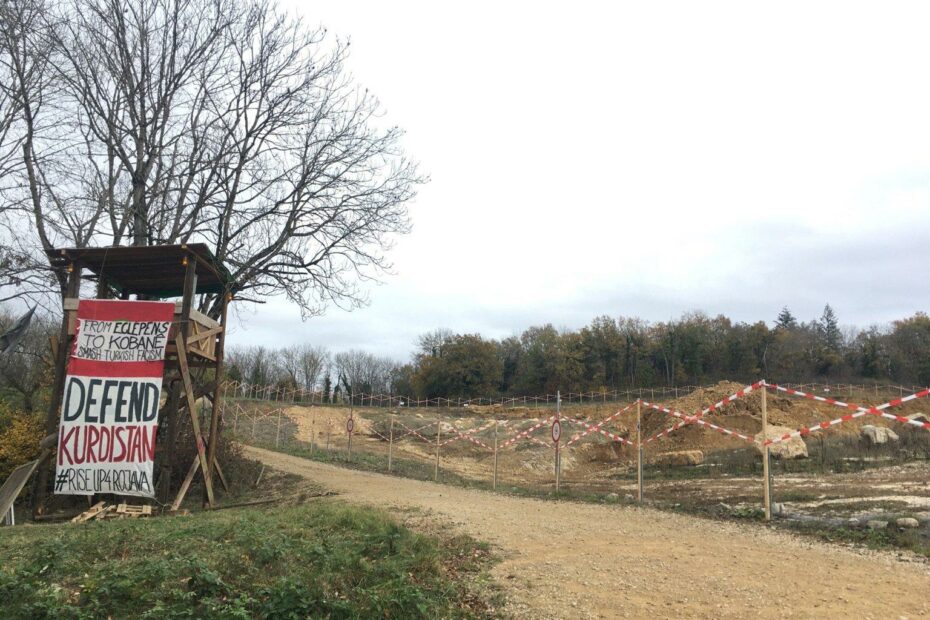 On the 2nd of November 2020, we celebrate the World Kobane Day and the Rojava Revolution from the « ZAD de la Colline »* (which stands in French for Zone A Défendre, “zone to defend”) in Eclépens, Switzerland as part of the week of action for Rojava from the 1st to the 8th of November.

To show our support to the Rojava Revolution, the ZAD, with the members of the Rojava Committee Geneva and the Make Rojava Green Again campaign together put up a banner – “Smash Turkish Facism – Defend Rojava” – which now decorates the watchtower at the entrance of the barricade of the ZAD de la Colline in Eclépens. Besides this, we are planning discussions related to Rojava in the week in order to share about our struggles, geographically distant, but which, from local to international, are intimately linked.

We are linked because, despite our very different contexts, we are fighting for the same liberating project that seeks to recreate convivial societies where human beings and ecology prevail over the commercial logic of the current socio-economic system which, by its internal way of functioning, pushes for the destruction of life, advocates competition rather than mutual aid between peoples and causes the oppression of the great majority by a privileged minority.

Here at the ZAD, we are taking direct action to thwart a useless project to extend a cement quarry that threatens to destroy the natural environment rich in biodiversity that is the Mormont Hill. This place, in addition to being a biological and geological treasure and a Celtic site recognized at the European level, is the target of the multinational LafargeHolcim, the world’s leading cement company and one of the Carbon Majors, the companies with the highest CO2 emissions in the world. Holcim is the most polluting company in Switzerland in terms of direct emissions. Our presence aims both to denounce the concrete industry, responsible for about 7 percent of global CO2 emissions while construction alternatives exist, the devastation of a crucial and important place, and to show the limits of the system whose logic of growth ravages the earth’s limits. Much more than that, we are simultaneously seeking to build alternative lifestyles on this place and to create spaces in struggle. We organize ourselves in a non-hierarchical way and according to anti-oppressive principles. We seek to create a political alternative to the capitalist and patriarchal system, respecting ecological limits.

In Rojava, too, capitalist modernity has been challenged for eight years now, when this region in northeastern Syria declared its autonomy. Since then, the revolutionary movements there have put into practice an alternative system based on the three pillars of ecology, gender liberation and decentralized and radical democracy. Functioning without a centralized nation-state, this revolution is pluralist; at the base mainly carried by the Kurdish revolutionary movement, it now regroups all the ethnic groups of the region – Arab, Kurdish, Turkmen, Assyrian, and many others – behind one and the same ideology: democratic confederalism. Because it advocates understanding and cooperation between peoples and their organization into different decentralized entities grouped into a confederate system and because it accepts all cultures and beliefs, this revolution offers a concrete solution to the current problems of the Middle East. This revolution is dear to our hearts, because it is proof that a non-state, pluralist system that actively fights for ecology and gender liberation is not just an utopia, but a tangible reality being made.

But today, as many times in the past, the revolution in Rojava is threatened from all sides. Because it is disturbing, because it is opposed to the imperialist interests of the authoritarian regimes of the region and against the logic of trade, it is caught between, on the one hand, the totalitarian Syrian regime of Bashar El-Assad and, on the other hand, the fascist Turkish state of Erdogan, which seeks to recreate an Ottoman empire in the region. In 2016, 2018 and 2019, Turkey invaded already autonomous zones on Syrian soil, violating international laws. And Turkey does not intend to stop as long as the Rojava Revolution exists. The current situation is extremely tense and a new illegal and genocidal invasion could start soon. It is for this reason that we are joining the week of action called by the international campaign RiseUp4Rojava, in order to affirm our solidarity and because we share the same goals and dreams. By showing and talking about the Rojava project around us, we can help to protect it by increasing the pressure on our states, which until now have preferred to close their eyes to Turkey’s actions. Europe and Switzerland, through the financial ties that their companies have with Turkey, are fully involved in the destruction of this ecological alternative. And to mention just one example that we are familiar with: the multinational Lafarge-Holcim, which we oppose on the ZAD’s hill, is accused of having paid several million dollars to DAESH and Al-Quaeda in Syria, this way indirectly involved in the destruction of Rojava, in order to be able to continue their cement production in the Kobane region. This coincidence, which clearly shows the real international impact of Lafarge-Holcim and their disregard for ethical and ecological issues, reminds us how much our struggles for another world are linked.

Against a capitalist system that destroys nature and peoples,

– On the RiseUp4Rojava campaign: www.riseup4rojava.org

*The occupation of the Zad de la Colline (Zad of the Hill), has just started this octobre 2020 to confront one more destruction of the nature by the enterprises Lafarge-Holcim in Switzerland. It takes its name from the ZAD movement that began in France with the now famous Zad of Notre-Dame des Landes, which since 2008 fought against the creation of a mega-project of airport and continues today, after its victory and the abandon of the project in 2018, to create an alternative way of living outside of the capitalist modernity. Find the description of the Zad de la Colline in english on : https://orchidees.noblogs.org/qui-sommes-nous/#more-367