Call for the action week from 1st to 8th November 2020 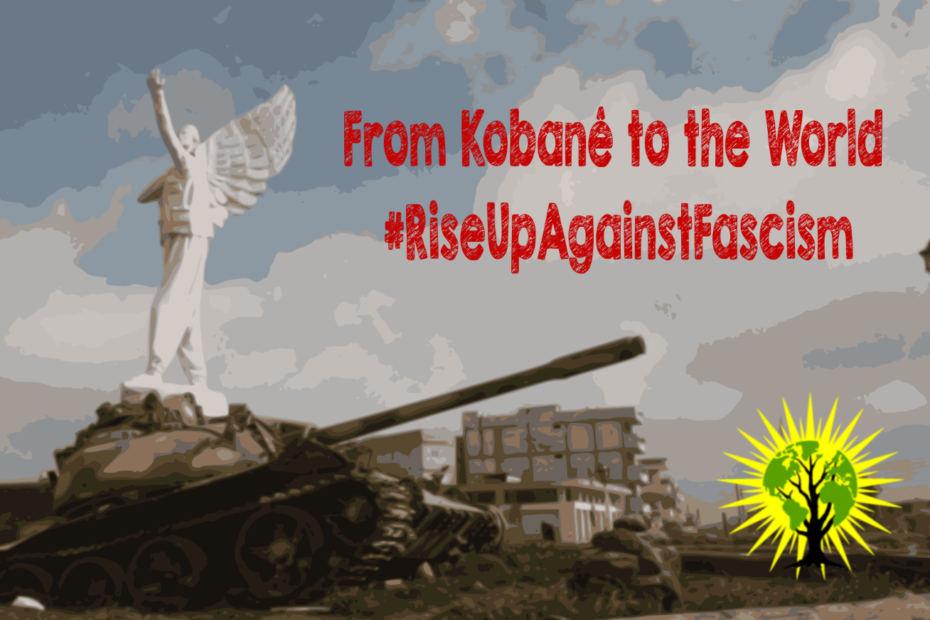 From Kobanê to the World: #RiseUpAgainstFascism

1st November 2014 was a milestone of internationalist solidarity. Back then, millions of people took to the streets to support the heroic resistance of Kobanê against the forces of ISIS, that were ruthlessly rampaging through vast parts of Iraq and Syria. With its war against the people and nature of North and Eastern Syria, ISIS continued the tradition of the Syrian regime that was exploiting the areas’ resources and severly damaging the ecosystem. The fight against those dark forces was not only one for freedom and for survival, but aimed to build an ecological system where the people will take care of their environment by the means of reforestation, sustainable agriculture, and ecological energy infrastructre.

While supporting the fighters of the Women’s and People’s Protection Forces of Rojava – YPJ and YPG – progressive people from diverse backgrounds of age, gender, and political orientation found unity and hope for a better future, and victory of light over darkness.

As the YPJ and YPG freed Kobanê from ISIS and the people started to rebuild the city after the principles of women’s freedom, radical democracy and ecology, they planted a sapling that soon spread over the whole region of North and Eastern Syria.

Today, this sapling has grown into a social revolution and has started to provide the people of the region with the fruits of freedom and hope. With its paradigm of finding a new way to live in harmony with nature and peaceful coexistence between the peoples it inspired ecologists all over the world in a time when the capitalist mentality of the nation states causes chaos, destruction and war amongst humans and nature alike.

Especially the wars of agression that the Turkish state is waging not only against North and Eastern Syria, but also against other parts of Kurdistan are endangering the achievements of this revolution and are standing for the exact opposite of what we as ecologists believe in. To cleanse the region of its native people, the Turkish state and its allies are burning fields, cutting trees and are blocking the natural water flow of the Euphrates that has made the region a dwelling paradise since the beginning of civilisation.

After the occupation of the region of Efrîn, the green lung of Rojava, in 2018 as well as Girê Spî and Serekaniyê one year ago, the Turkish state is again preparing for war, supported by the global actors of Europe, the US, and Russia.

In the same way that the capitalist nation states are united against the values of women’s freedom, radical democracy and ecology we too have to, once again, unite and rise up for these values.

For this cause we, as Make Rojava Green Again, together with the campaigns of Rise Up 4 Rojava and Women defend Rojava are calling every ecologist and progressive force for a week of action from 1st – 8th November.

Let’s express together our solidarity with the fighting people of Rojava and take to the streets on 1st November, the World Kobanê Day!

From 2nd – 5th November, let us together highlight the struggles and goals that unite us and move us globally, and that strengthen the common alliance in our diversity.

Let us together, from 6th to 8th November, disturb – blockade – occupy in a decentralised way the places of international cooperation and support of the Turkish state.

We call, therefore, for a week of solidarity, a week of strengthening the ecologist struggle globally, a week of civil disobedience against fascist rule, capitalist exploitation and imperialist devastation of our livelihoods and nature itself!