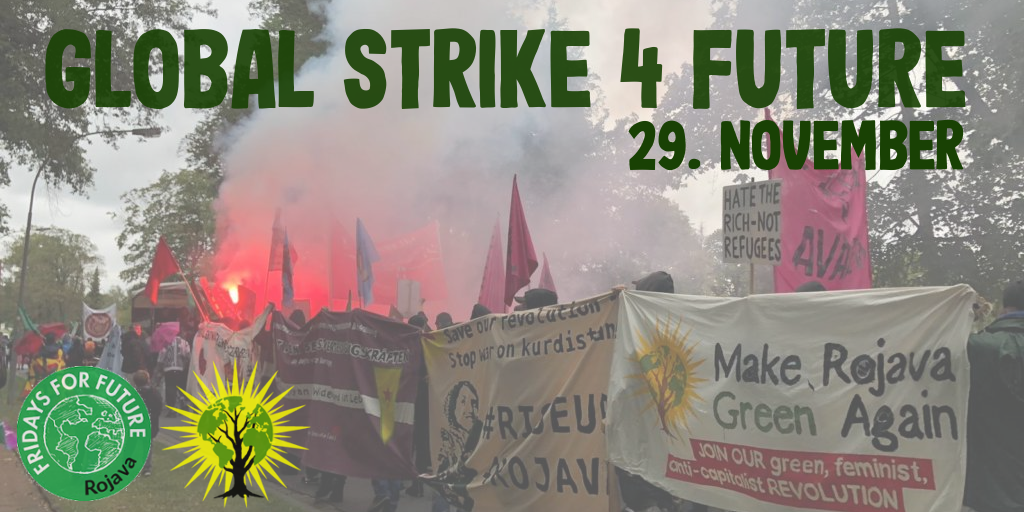 The upcoming Global Strike 4 Future of the global justice movement on 29th November will be marked by worldwide protests by thousands of people from Chile to Rojava, from Hong Kong to Iran. They all fight for the interests of the people and of nature, and they demand a self-determined and dignified life, not according to the standards of power and profit. Faced with times the climate crisis, politics and businesses are trying to present their poor compromises as great solutions. And the world powers celebrate themselves as peacemakers in the war in Rojava, while bombs from Turkish NATO planes continue to bomb people and destroy nature. All those who are on the worldwide streets know that real climate justice and global peace can only be achieved with fundamental systemic change.

Defending Rojava means defending the construction of an ecological society

The governments of the European states, as well as Russia and the USA, are ready to sacrifice our future for their interests and for economic profit. And the social revolution in Rojava, based on the values of women’s liberation, ecology and radical democracy, means nothing to these states in their efforts to redivide the Middle East. These states actively support the destruction of this social upheaval, because Rojava is a worldwide alternative for all people who disagree with the existing and are looking for solutions to the ecological, political, economic and social crises. Therefore, it is our responsibility as an ecological movement to continue to defend Rojava against the interests of power, profit and fascism.

The future of FridaysforFuture is not in the institutions, but to build an ecological-democratic society

For more than a year now we have been on strike every Friday, trying to convince with better arguments, demanding politicians to act. However, politicians do not act, they cannot be convinced. What now? What do we do if arguments are not enough, if formulating demands does not change anything? The consequence of these experiences is not the “march through the institutions”, as some of FridaysforFuture have already demanded, but rather the consequence is to become a movement that can implement an alternative itself. Not to trust in the state, to know one’s own strength and to be able to formulate concrete alternatives is one of the most important experiences we made in Rojava.

We, therefore, call on everyone to take part in the global day of action on 29th November. United together, let us send a clear message of international solidarity with Rojava and the protests in Chile, Hon Kong, Iran and Bolivia. Let us defend together the social values of a community living collectively in solidarity with nature.

Like the sea we rise! For climate justice and Rojava