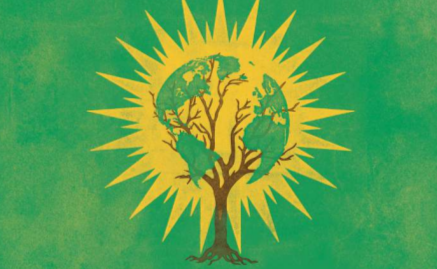 When the last tree is cut, the last fish is caught, and the last river is polluted; when to breathe the air is sickening, you will realize, too late, that wealth is not in bank accounts and that you can’t eat money.

As Make Rojava Green Again, we want to send our greetings to all activists and young ecologists who decided to stand up and take part in the climate strike. Here, in north-east Syria, we also decided to take action to defend nature. We are working on a plan to bring the ecological works for Make Rojava Green Again to a next level, working not only with the youth movement, but also the women movement and the social economy movements. Soon we will share more information about our next steps, focused on connect better with the local structures and get more rooted in the society.

The ecological situation in Rojava is difficult, with a lot of problems and contradictions. But when we say “system change not climate change”, here we can really work in practical steps, developing a system based on the principles of social ecology. The Autonomous Administration of North-East Syria is supporting our steps, and together with different ecological projects we want to be a example for all the world, showing how an ecological society is not only possible, but necessary.

Climate Strike is an example of global coordination, where the democratic forces of all the world, led by the youth, are standing up and saying “enough is enough”. We don’t accept a system that destroys our planet, we will resist and defend our land, our water, our air. We will protect life and fight domination. Strike has been a historical strategy for oppressed people to fight back against oppressors, and we should have this history in account. When we talk about climate strike we should not think only in disobedience, but also on active resistance. Resistance with what oppressed peoples can free themselves from the oppressors.

When we say we are against green capitalism, we have to be consequent. Capitalism is not only about economy. It is about resources, it is about nature, it is about how we organize and live our life. Capitalism is colonization and centralization, is monopoly and monoculture, is domination over life and nature. To implement this domination, capitalism has learned to hide itself under different masks, and today is dressed up with different costumes. This leviathan don’t care about anything else than profits, and is ready to do everything to expand his domains to new territories.

In the next years we will witness the rising of “green washing”, where hidden under the image of a “green new deal”, economic powers of the western world will start a new offensive. We have to be ready to answer, aware that those who don’t know the history will repeat the same mistakes. The “new deal” implemented by Roosevelt, savior of capitalist system after the “great depression”, brought some social reforms against economic crisis, but also established very important steps to protect the financial system, to armor banks and private companies, creating different institutions that made possible a non-seen-before centralization of economical power.

The so-called “green new deal” is willing to create hope, but is giving space to companies, corporations and governments dedicated to exploiting and destroying nature. This criminal organizations only look for one thing: to make money from the ecological crisis we are facing. We can’t tolerate this to happen. Nature is not a commodity that humans can exploit for their benefits, nature is the sacred ground that makes live possible. To price nature will not protect it, to tax the amount of CO2 that companies produce burning fossil fuels will not solve the climate change. The value of nature goes beyond any economical program that this system can design, and that’s what we mean when we say “system change, not climate change”.

Form Make Rojava Green Again, an ecological project born in the Rojava Revolution, we wish success to all actions willing to defend nature and raise ecological awareness. But we also warn against those willing to bring this young ecological movements into wrong directions. Life is a gift we can’t misuse, and we have to protect life no matter what it costs. Decades ago, ecologist movements were born under the slogan “think global, act local”. Now we have the chance to “think global, act global”. And we will take this chance. 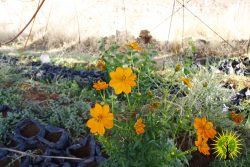 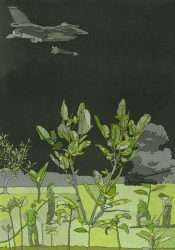 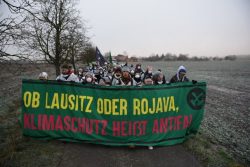