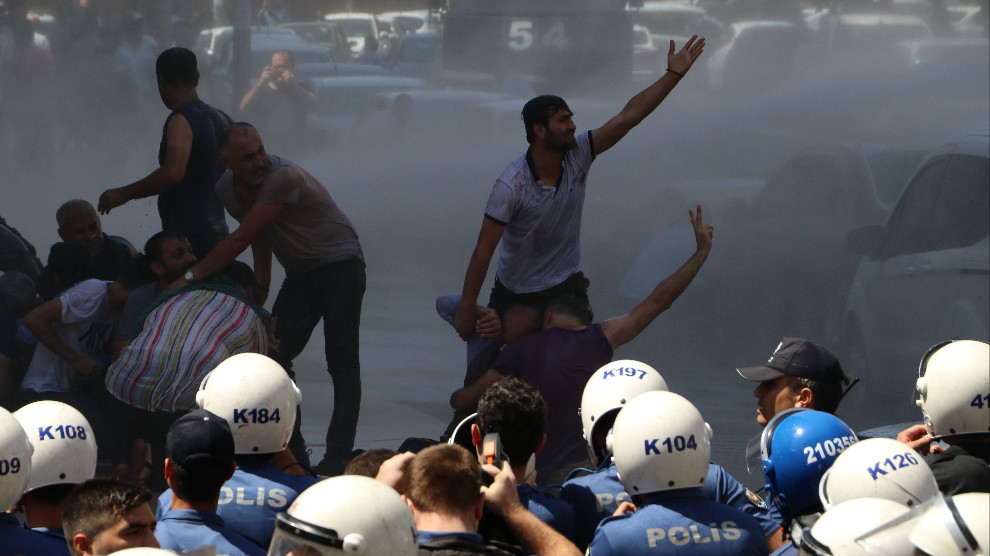 The Mesopotamia Ecology Movement (MEM) condemn the enforced dismissal of the co-mayors of Amed (Diyarbakır), Wan (Van) and Merdîn (Mardin) by the Turkish government and their replacement by administrators yesterday. Accompanied by hundreds of police forces the governmental appointed administrators occupied the municipal buildings and did not allow to enter the elected co-mayors. At the same time almost 500 oppositional activists from the municipalities and political activists have been arrested in the Kurdish provinces.

This act against these three big Kurdish metropolitan municipalities has no legal basis as stated by the Ministry of the Interior in its statement. In the last months many investigations with no ground have been initiated against these co-mayors, but so far no court has taken any decision. Therefore it is an act of “civil coup d‘etat”, not the first one in the last years in the Republic of Turkey.

These three municipalities as well as 70 more municipalities, where live mainly Kurds, have been won once more by the democratic-left oppositional People‘s Democratic Party (HDP) on 31st March 2019. The local elections have been held under unfair conditions and big political repression by the state against the HDP and other democratic parties. More than 8.000 HDP members and other oppositional activists are in prison for years, thousands activists have left the state in order not to be arrested, almost all demonstrations in the Kurdish provinces are forbidden, there is a high military presence in rural and urban areas.

In end of 2016 the authoritarian regime ruled by the AKP (Justice and Development Party) and the neofascist MHP had dismissed the co-mayors of 96 HDP held municipalities in Kurdish provinces and ruled the municipalities with state appointed administrators for 2,5 years. More than 5000 employees had been fired and hundreds of social, cultural, ecological, communal economy and women emancipation projects have been canceled and destroyed. Kurdish names disappeared from the public space. The cities and their surrounding have been transformed in an unsocial and neo-liberal way with construction projects given to close companies. Public spaces and natural areas became an object of financial interest combined with corruption – the debt of all occupied municipalities raised 5 to 15 times. As the MEM acts for an ecological life and against destruction of nature, the developments of the last three years concerned ecology activists in particular.

Remember also that in the first half of 2016 the Turkish military destroyed 7 cities, displaced forcibly up to half million from their homes and killed 400 civilians. Nevertheless the population did not accepted this dictatorship in their settlements with their votes in the local elections in March 2019. For five months there were no more concrete blocs when the people entered the municipal buildings for their affairs, the life became more enjoyable and new projects have been initiated.

The repressive act from yesterday is not only a deep antidemocratic revenge against the HDP, it is also the continuation of the century long colonialist repression and assimilation policy by the Turkish state against the Kurds. The Kurds resist despite growing political and military repression. Furthermore it aims to destroy the common democratic struggle of Kurds, Turks, Armenians, Alewites and others in the Republic of Turkey developed in the last years by the HDP. The AKP-MHP power, which is in crisis after the last location elections – it lost also big cities in West-Turkey – and the growing economic decline, wants to maintain its power by raising racism and intensified war within and outside the borders.

It is absolutely necessary that all democratic organizations and people all over Turkey stand immediately against this civil coup d‘etat and request the cancellation of the dismissal of the co-mayors of Amed, Wan and Merdîn. Otherwise the level of repression, which targets the Kurds, will hit them in a similar severe way too. The defense of the nature and ecological life is also connected to stand against the authoritarian regime of AKP-MHP.