Fire in Rojava: Fighting for the Revolution 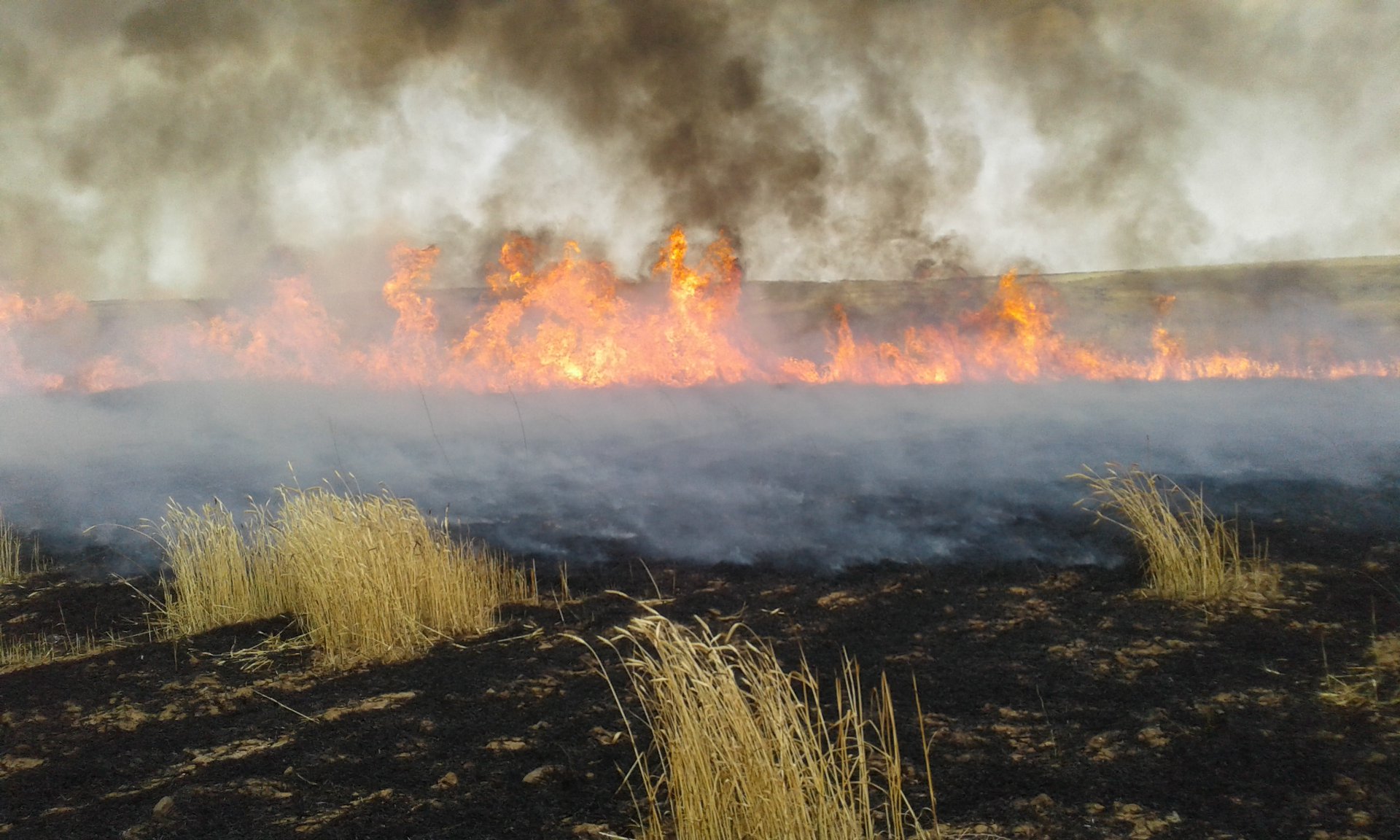 The article was originall published on supernovamag.de in German. We also want to remind about the running crowdfunding campaign to raise money to support Rojava’s farmers.

It’s forty degrees (104 Fahrenheit) in the shade. The midday heat has pushed us all into the air-conditioned indoors. Several comrades are sleeping; others are on their laptops, reading, or playing chess. All of a sudden, the door to one of the bedrooms bursts open, and a comrade shouts, “Wake up! There is a fire outside!”. We halfheartedly rouse ourselves – there are always small fires in Rojava – so our comrade adds, “Just come! It’s huge and it’s close!”. Once outside, we begin to grasp the gravity of the situation: above us billows a thick cloud of smoke; the smell of burning fills the air. We run to a hilltop in order to look at the column of smoke. And up here, we see it: no more than a kilometer away, a wave of fire is burning through the wheat fields in the direction of a village.

What comes next happened so fast: some stay behind at the camp to set up a wet barrier in the fire’s path; others start running down the road. Cars are rarely ever on the road here, but now every vehicle was en route to the fire. The “Asayîş” (the federation’s internal security forces) alert the surrounding communes; in the city, people close up shop and set off, while several members of the self-defense units head toward the fire. Everyone wants to help.

For an hour and a half, we fight the source of the fire with grain sacks. During the struggle to extinguish the fire, I continue meeting people I’ve seen before: a taxi driver, a traffic warden, my hairdresser, or the general of the YPG brigade stationed here. It felt as if all of Rojava was out there working in that field. A little later, a fire truck finally shows up to put out the fire, and so this is how we manage at last to extinguish the blaze.

This was all a couple weeks ago now. Since then, we have learned that we got off easy. The fires are being set – in various places in Rojava, as well as in the Kurdish areas of northern Iraq. In the past few weeks, over 40,000 hectares [roughly 98,842 acres] have been destroyed. Dozens of people have died fighting the fires, and more still have been injured. The Islamic State has claimed responsibility for starting some of them; others were ignited during bombardments by the Turkish Army, but it also seems that the Assad regime has played its part, too. Two Syrian agents have been arrested in the course of investigations by the autonomous government. What is more, the regime also uses this tactic in nearby Al Qaeda-controlled Idlib.

“Fire as an Instrument of Propaganda”

This terror is aimed straight at the heart of the Syrian Revolution. Not only because it attacks the population’s livelihood, kills people, and burns down villages, but because it seeks to divide the people. The enemies of the revolution use the fires as an instrument of propaganda. Old conflicts are rekindled in order to prevent the goal of a united, democratic Syria. According to the regime and Turkey, the Kurds supposedly set the fires in order to punish the Arab population. And, indeed, these attacks have hit the Arab population the hardest, since Rojava has long been the breadbasket of Syria. Under the regime, the region would be brought into colonial dependence on the metropolis in the southwest. Over 70 percent of agricultural products and crude oil come from areas within the Federation. Industrial processing is done by the regime. The Federation also trades crude oil and cereals with the regime and receives in return fuel and money, which is needed for imported goods. If the U.S. were to prevent this, it would fall to the region to provide for the Syrian people with only meager supplies. Crop failures especially impact exports to Assad-controlled areas, where bread is becoming more expensive, the population poorer, and the democratic revolution is being held responsible for it.

“We shall not be divided” 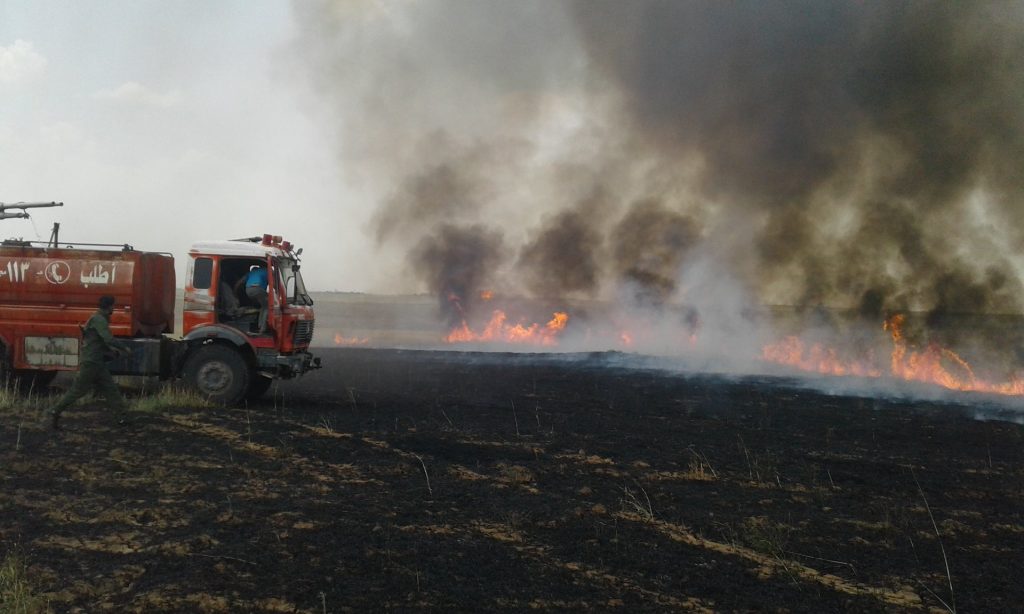 And yet, right in the middle of the heaviest attacks, the revolution in Rojava shows, time and again, how united it truly is in its resistance. The village threatened by the fire was mostly Arab. In the 1970’s, the Baath party settled over 4,000 Arab families in Rojava, expropriated Kurdish farms, and handed the land over to the Arab families. The village that nearly fell prey to the fire was one of these villages. And yet, on that day, none of the historical tensions or ethnic divisions were felt. Just as ISIS and the Central State shall be pushed out of northern Syria, so shall our shared lives, work, and struggle become even more natural. While fighting the fire, Kurd and Arab mixed freely. It was overwhelming to see how naturally and responsively all of society set to work against this act of terror. Recently, we held a funeral service for the comrades who died in the fire. I had been to many funerals before, but they were all military services. This was something else altogether. There were more people there than any I had attended before, military and civilian, Arab and Kurd alike. At the end, the mother of one of the fallen Asayîş gave a rousing speech. She spoke in Arabic, so I didn’t understand a word, but I asked a comrade to translate into Kurdish at least. I didn’t understand very much, but the last sentence remains stuck in my head: “Even in death, we shall not be divided!”.

[About the author:]
Jan-Lukas Kuhley fought for six months as a volunteer in the Kurdish People’s Protection Units (YPG) against ISIS in Northern Syria. Later he lived in the Internationalist Commune and participated in media outreach.