On 28-30 June people from Italy, Switzerland, Germany and Britain came together in the Italian Alps for a gathering of the international Make Rojava Green Again initiative.

Make Rojava Green Again (MRGA) is an international campaign aimed at focusing on the ecological pillars of the Rojava revolution. In Kurdistan, MRGA is based in the Internationalist Commune of Rojava. In Europe, the MRGA campaign aims to raise awareness about the Rojava revolution among ecological activists. The gathering was hosted in Val de Susa, the home of the three decades old ‘No-TAV’ struggle against the construction of a high-speed trainline from Lyon in France to Turin in Italy. The gathering made space for three days of workshops on taking the campaign forward in Europe, and a discussion on social ecology hosted by the Italian MRGA group. On the last day of the gathering MRGA activists and members of the ‘No-TAV’ campaign shared their experiences of struggle.

Çîya Demhat spoke about the ecological problems caused by the Assad regime, the Turkish state and Daesh in Rojava. He said:

“Before the Rojava revolution, the Assad regime encouraged reliance on monoculture to try to ensure that Rojava could never become a viable separate entity. At the same time other types of agriculture, like the planting of fruit trees, was banned. This monoculture was very heavily dependent on water. And on chemicals and fertilisers, some of which have been banned in Europe. Also, there has been a ban on planting trees wich has had a severe adverse impact on the soil. Beside those problems, and since the revolution started, there has also been a lot of pressure from the Turkish state [which has affected the environment]. For example, dam construction in Turkey has caused enforced drought in Rojava. The Turkish military has also set fire to olive trees and Depleted Uranium (DU) has been used in the area. DU turns into dust in the air and causes cancers, particularly in children.”

“One of our main goals is to connect the struggles of democratic confederalism, women’s liberation and ecological struggle. We carry out research with people living in the area [close to the Internationalist Commune] about the way they used to live. How people used to work with animals and with nature. We have created a tree nursery where we have collected a lot of types of tree, some of which didn’t exist any longer in Rojava. We have been carrying out practical work with a commune in the next city of Derik, planting trees on the river banks and have also set up a greywater project at the Internationalist Commune to re-use waste water. We are now working in the city of Qamishlo to build up the waste recycling system there.” Then he finally added : “Internationalism is a central thing for MRGA, because conserving nature is important but it will not bring us to revolution on its own”

Finally, Franceska from MRGA spoke about the campaign’s work outside Rojava:

“We are a network spread all over Europe. And we have support in South America and the US. We try to raise awareness about the ecological aspects of the revolution. We also try to exchange and share knowledge about low-tech technologies, which can be democratically managed and governed. This knowledge is particularly useful because of the effects of the embargo on Rojava on technological development”

The activists also listened to a presentation from Val de Susa’s ‘No-TAV’ campaign. Nicol, who has been involved in the ‘No-TAV’ movement for many years, said:

“Our struggle in Val de Susa has been ongoing for 30 years… It is not just a struggle against a trainline, it is an ecological struggle against the devastation of the land. The work [on the tunnel for the high-speed trainline] has not yet started but they have already destroyed many 100-year-old trees. It is a struggle against the international model of rapid, consumerist development. A system that favours the constant flow of money and merchandise, but not the movement of people. The Italian government has failed to properly manage the small rail lines that are built for the people. But it wants to support this new project that is only in the interests of money, and of moving businessmen very fast”

“We share a lot of solidarity with the struggle for democratic confederalism in Rojava because, like our movement, it is a struggle of the people from the bottom up”

“In 2005, the police came to evict our Presidio [resistance house]. Very quickly, thousands of people came to defend it. The police tried to block the road but the people forced their way through. After that, the project was put on hold for several years. In 2011, new plans were made to dig the tunnel for the high-speed train in a smaller valley, which was easier for the police and military to defend. But ‘No-TAV’ activists found out the location and occupied the valley, declaring an autonomous republic controlled by peoples’ checkpoints. The space was held for one month.”

Roberto spoke about the police repression of the autonomous zone:

“2500 police came and beat and teargassed the people and re-established control. They forced the people out. Then exploratory work on the tunnel began.”

“The fact that they have only been able to do exploratory work, and not begin the actual work on the tunnel is because of the resistance of the people of the valley and of the “No-TAV” movement. We are stopping them doing any real work. Over 30 years of struggle have learnt that we can’t wait for governments. The ‘No-TAV’ movement will not have achieved our goals until we have changed the global development model. We need to change this model from the bottom up. The new model we create will not only be a local one. We need to find solutions together and cooperate internationally. Another thing we have learnt is to listen to the experiences of other struggles and learn. For exemple, we need to learn how to self-criticise : to do Tekmîl. Little by little, after inspiration from the Kurdish struggle and elsewhere we have begun to try to create a strong autonomous system [in Val de Susa]”.

The Make Rojava Green Again gathering concluded with MRGA and ‘No-TAV’ discussing how to work more closely together in the future. 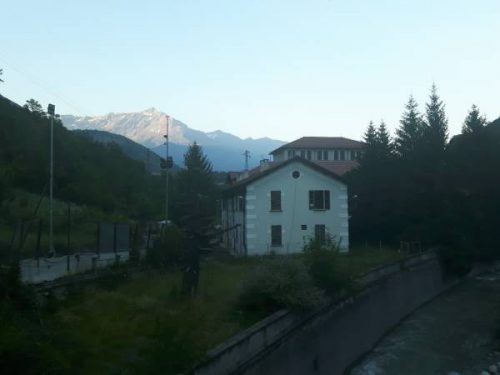 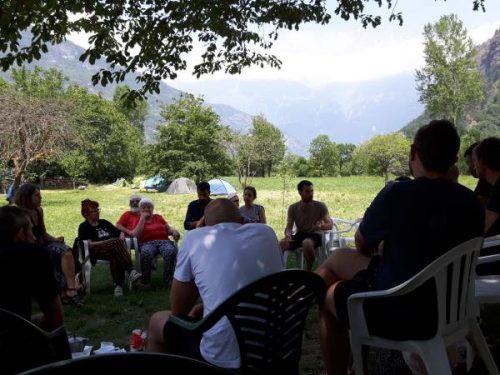 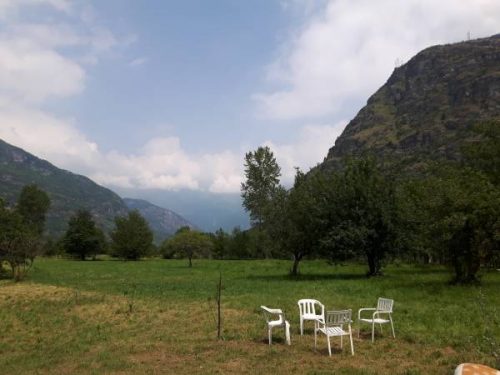