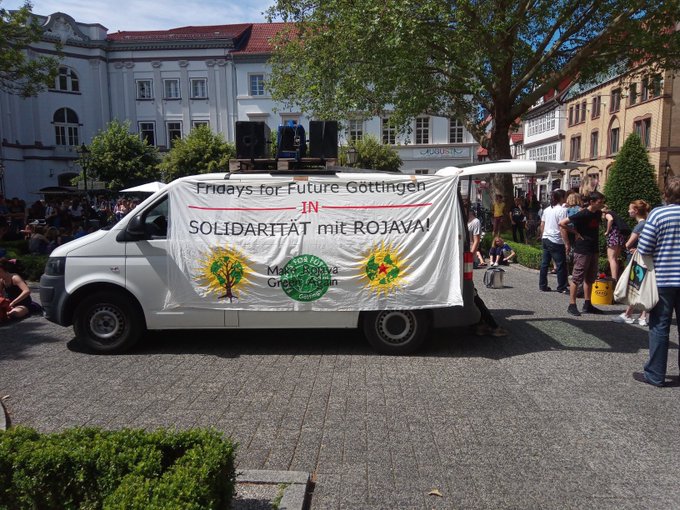 Capitalism shot into its own leg at the end of history; it is now up to young people all over the world to shake the already broken system once and for all.

This year the discussions and struggles for the climate have gained enormous attention and outreach. The importance and seriousness of the situation, although long known, has been emphasized in recent months by young people around the world. The “Fridays for Future” movements have grown into a notable and remarkably young global mass movement – with local actions in many European countries, Australia, China, India, Japan, Turkey, Rojava, South Korea, Thailand, South Africa, Uruguay, Argentina and Mexico. The weekly strikes are led and organised by young people. The goals are concrete: the fastest possible exit from coal, a complete switch to renewable energies, consistent taxation of greenhouse gas emissions and compliance with the relevant international agreements. Global warming should not exceed 1.5 degrees Celsius. It is now clear to many that these are not unrealistic, utopian goals, but the only way out of the current situation.

In the protests it is made clear that there will be no future worth living if things continue as they have done so far. With similar words, about 100 well-known “YouTuber” have launched a call to their subscribers shortly before the European elections on Sunday, in which they refer to the climate crisis and advise against electing parties that have no prospects in this respect, stand idly by or even refuse to recognise the crisis. After the enormous success of the Greens in Germany, who were able to double their share of the vote in the European elections and thus overtook the SPD, the SPD even speaks of the “Rezo” effect – the Youtuber Rezo had previously published and launched the call. There is no doubt that the climate seems to be one of the most important issues for young people in Germany.

A part of society that should not be underestimated, however, continues to deny and trivialise climate change. The climate movements are bombarded with accusations, accusations and ridicule. Especially the right-wing, conservative, but also economically liberal camp tries to either deny climate change or trivialize its effects and present it as if the crisis could be solved within the framework of the current situation. The demands of the climate movements are deliberately distorted: It is often said in a scornful tone that the strikers wanted to go back to the Stone Age, that they would stop “progress” or simply want to skip school under the pretext of a strike. 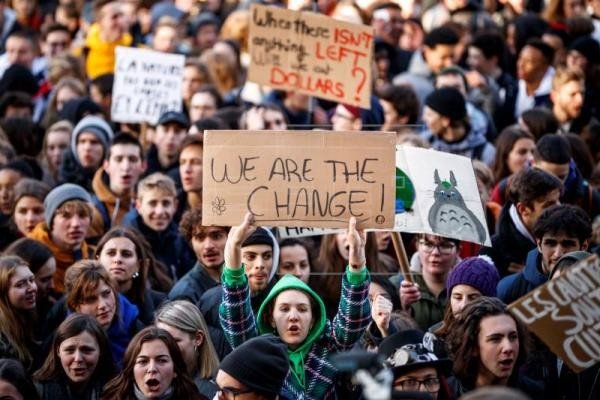 What is certain is that the climate activists must withstand all kinds of delegitimization. Thus, shortly after the election, CDU Chairwoman Kramp-Karrenbauer denied the Youtubers the legitimacy of their political positioning. And the right is repeatedly told that there are hidden power interests behind the climate movement, and that activists like Greta Thunberg are only puppets in a power game.

It is no wonder that people develop such a vivid imagination when it comes to looking facts in the eye, especially when reality is so at odds with one’s own lifestyle, one’s own political positions and one’s current value and economic system. The climate crisis ultimately reveals the failure of the supposed economic and technological “progress” of Western civilization, praised by both liberals and rightists. Here I would like to quote the revolutionary, anti-colonialist thinker Frantz Fanon, who said 60 years ago: “For centuries Europe has stopped progress in other people and subjugated them for its own purposes and glory; for centuries it has suffocated almost all humanity in the name of its supposed ‘spiritual adventure’. See how today it oscillates between atomic and spiritual dissolution.”

The majority is now aware that the neoliberal system, which is committed to freedom and progress, has now failed at the latest. What the exploitation of women workers, the worldwide hunger and the ever-increasing poverty have shown for decades finds its last proof in the climate crisis. Capitalism has not only uprooted and alienated mankind from (its own) nature, but has also attacked and dismembered nature to such an extent that all living beings are deprived of their livelihood. The climate crisis is not a natural development, nor is it, as some claim, the result of overpopulation.

The climate crisis is the result of unlimited production, unlimited market freedom and consumer orientation. It is a question of economic and energy policy, and therefore of the system in which we live. All statistics suggest that climate change is man-made and that greenhouse gas emissions are particularly due to the excessive use of fossil fuels in the mass production of goods in neoliberalism.

Not aligning the struggle to the given circumstances

So it is questionable whether the success of the Greens in the European elections will change anything. Apart from the fact that the Greens did not take any significant steps in the Federal Government in the past, an outcome of the current ecological catastrophes cannot be aligned with the given economic conditions. An ecological struggle must be explicitly anti-capitalist and must not make compromises in the sense of capital.

The gain of green parties in Europe is therefore not necessarily a gain for the current struggle of the many young people who are working at the grassroots level for the climate. On the contrary, the next few years will present the movement with even greater challenges: It must not rely on parliamentary politics and must consistently fight against “green capitalism”.

The movements must not bow, and the only way to fight consistently is to develop a positive, socialist perspective for the future, a real alternative for which it is worth fighting. The demands and goals should therefore never be formulated only negatively, but should also contain concrete positive aspects for a livable, beautiful future for all. Those who cannot present an alternative will see no light at the end of the tunnel and will lose themselves in recurring aberrations.

Potential for a common movement

Creating an alternative that brings together and involves all parts of society can overcome an incredible number of barriers. The example of self-governing structures in Rojava/Northern Syria shows the strength of political self-government. People are taken seriously as political subjects and have their say on matters that concern them. Such a form of grassroots work and organization is needed so that divisions within society can be loosened. A strongly polarizing language is used, especially when it comes to the climate, where the “others” are quickly accused and condemned. But through this rapprochement the rejection can even strengthen itself, because it does not try to win people for itself. Only when people are picked up where they stand and perceived and taken seriously as political subjects in this struggle can a flourishing struggle emerge. 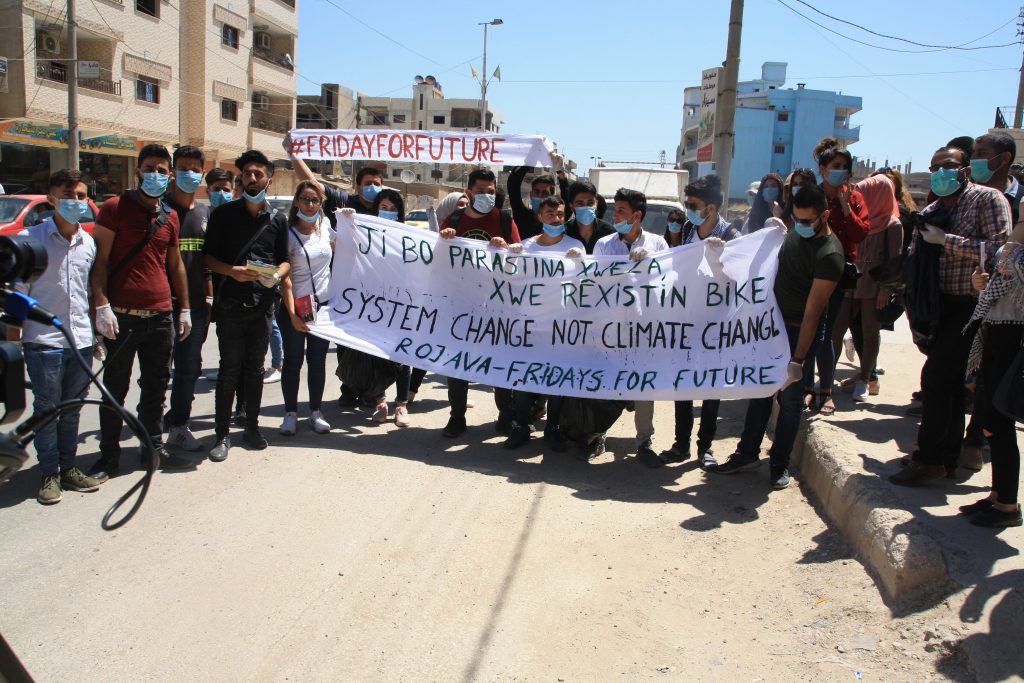 The fact that climate change affects and will affect everyone on this planet without exception can also be seen as an opportunity in this respect. The climate crisis has the potential to mobilise all possible movements for a common struggle. Whatever utopias we create, we will not be able to realise them in a broken and destroyed world. The young age of the activists* is also a great advantage. Pupils*, children, young people, students whose energies are otherwise exploited and whose rebellions are often punished and subjugated, are now organising themselves and are heard by the whole world. Within a few months, millions of people around the world have risen, even if it all started small.

Ecological struggle can only be internationalist

“System change not climate change” is what many Fridays-for-future protests say. We should take this slogan at its word and organize a way of living together that is worth living for everyone in the world. The ecological struggle can only be internationalist, not only because regional changes do not bring much, but also because we have to be aware that the extreme greenhouse gas emissions of the so-called industrialised countries affect above all economically poorer regions, which lack the means to protect themselves from the effects. The supposedly progressive Western civilisation is responsible not only for its own crisis, but also for the degradation of nature everywhere. At the end of history, capitalism shot itself in the leg, and it is now up to young people all over the world to shake the already broken system for good.