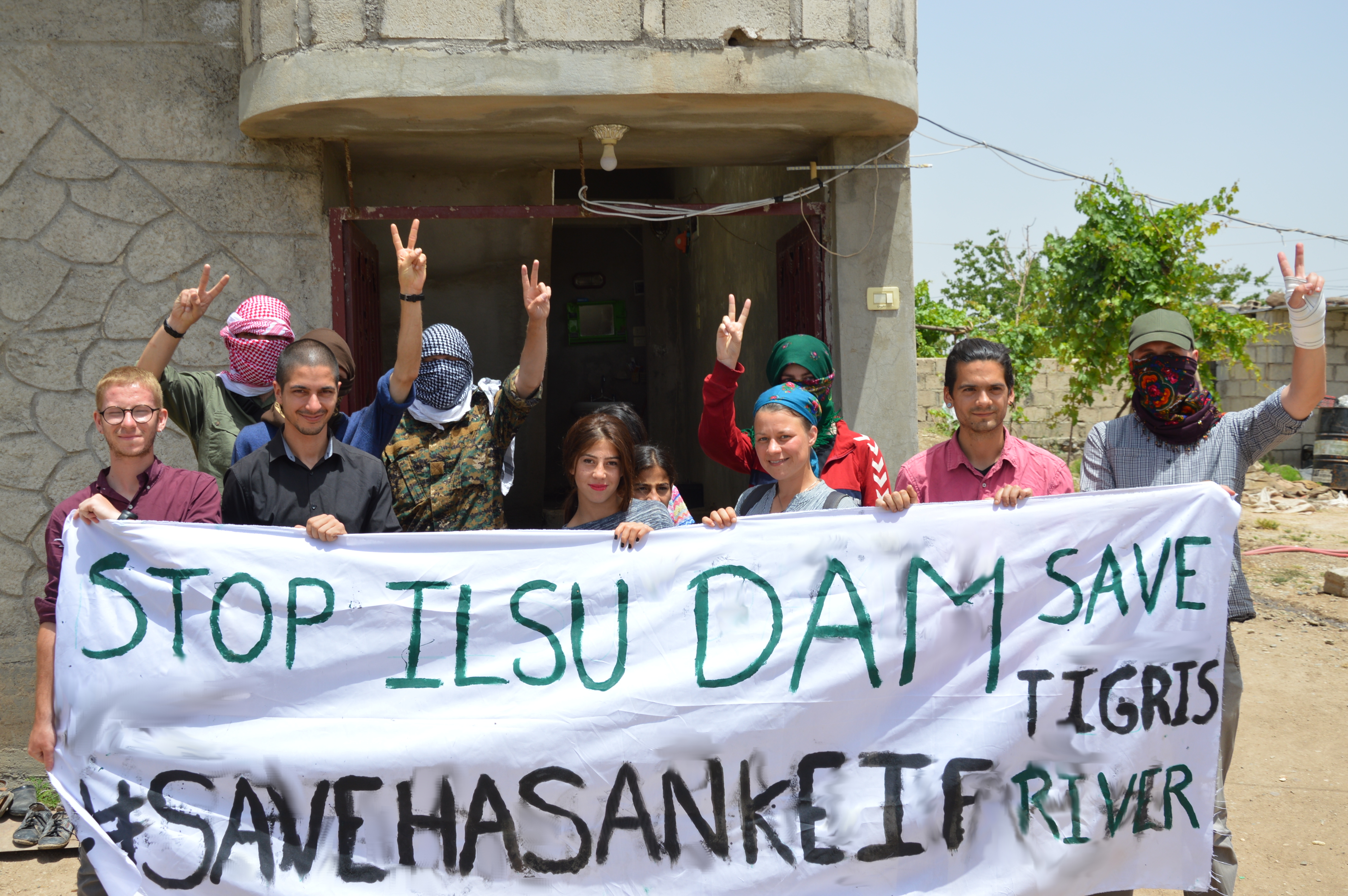 Also in Rojava in the village of Carudi, close to the Turkish border, where the people are also suffering from the water shortage, we, together with local people protested against the Ilsu Dam!

It’s not too late to SAVE HASANKEYF and Tigris River!
No to filling the Ilisu Dam Reservoir!

The Turkish government announced that it will start filling the controversial Ilisu Dam on the Tigris River in Turkish Kurdistan on 10th June, 2019. This would lead to the flooding of the 12,000 year old town Hasankeyf, 199 villages, and the Tigris River valley across a length of 136 km. While up to 100,000 people would loose their livelihoods, only the Turkish government, some big land owners and few private companies would benefit. That’s why most of the affected community is against the Ilisu Project.

The Ilisu Project is being carried out in an area of intense military conflict between the Turkish Army and the Kurdish Guerrilla, which the project can only intensify. Furthermore, the displacement of tens of thousands of people would deepen the ongoing state assimilation policy of the Kurdish population.

The catastrophic social, cultural and ecological impacts would also be experienced in the downstream stretches of the Tigris, within Iraq. It would seriously jeopardize the water supply of major Iraqi towns like Baghdad and Mosul, and agriculture in Iraq would be put under serious risk. In particular, the UNESCO World Heritage site of the Mesopotamian Marshes in southern Iraq is at risk of dry out due to reduced downstream flows. Water is used by Turkey as a weapon. Half of Mesopotamia along the Euphrates River is set to either be flooded by dams in the upstream part, or dried out in the downstream part. The situation is heightened by the growing climate crisis, with decreasing rainfall and snow in the last 20 years.

Hasankeyf sits on rich uncovered cultural heritage – a unique natural open-air museum of uninterrupted human settlement embedded in the Tigris Valley, with traces of 20 cultures who have woven its history. Experts have declared Hasankeyfe the twin of Göbeklitepe, one of the oldest human settlements, the discovery of which led to a new understanding of human history. Although Hasankeyf and the surrounding Tigris Valley fulfill 9 out of the 10 UNESCO criteria (of which only one should be sufficient), international organizations like UNESCO remain silent. The flooding of Hasankeyf and 400 other unexcavated archaeological sites would be a cultural genocide! The plan of the Turkish government to relocate 7 of the many hundreds of monuments is an attempt to deceive the public, and has no cultural value.

Despite export credit guarantees from Europe halting as a result of protests in 2009, there is still international participation in the project. Austrian company Andritz, and Dutch company Bresser are set to profit from this ecological and cultural devastation, as will the Spanish BBVA bank, which owns one of the Turkish banks that is financing the dam.

Despite the project being almost completed, almost nobody has yet been displaced. There is still a chance for a way out from this disastrous project. Over the last few decades many large construction projects have been abandoned, and so can this one.
The Turkish government must cancel the Ilisu project. A new participatory and transparent discussion on the future of the affected region must take place, with all affected people, municipalities and NGOs. An alternative to the dam can be found, and one that will be beneficial for the society of the region; socially, culturally and economically.

The final requests/words could be among others:
Hasankeyf is our culture and the Tigris our nature!
Save Hasankeyf, the Tigris and Mesopotamia!
Hasankeyf should be on the Unesco World Heritage List
Andritz must pull out from the Ilisu project!
European Governments must sanction Turkey if it starts flooding Hasankeyf!
The Iraqi government must act openly against the Ilisu Project!

See for pictures and videos of the action: #SaveHasankeyf