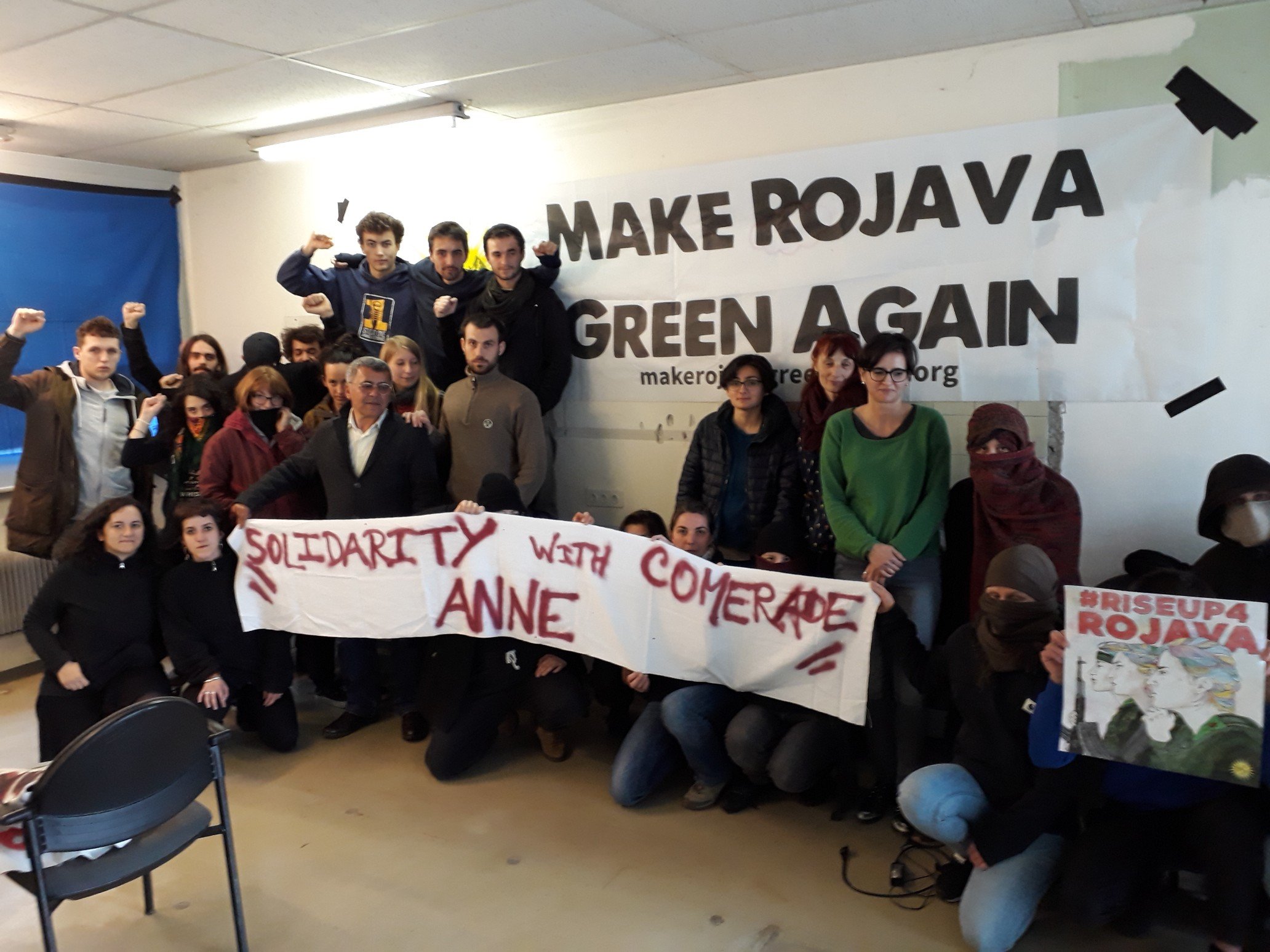 We condemn the repression against the Danish activist Anne Dalum. After the Danish secret service (PET) found out that Anne had planned to travel to Rojava (Northern Syria) to participate in the ecological projects of ‘Make Rojava Green Again’ her passport was taken away by Danish police. A court case to try and overturn this decision is now underway in Frederiksberg, Denmark.

We see this action by the Danish state as part of a wider context of repression in general against activists supporting the democratic project in Rojava . In particular, international fighters of the self-defense forces YPG/YPJ returning to Europe are facing high repression. (i.e. in Italy, the UK, Denmark, Germany, Switzerland and Spain). YPG/YPJ and the Syrian Democratic Forces (SDF) are the structures defending the people of Northern-Eastern Syria. They defeated the Islamic State and therefore saved not only the people of Rojava, but humanity as a whole. In this fight against fascism thousands of fighters, including internationalists, gave their lives.

Only because of this heroic resistance are we now able to work on the construction of an ecological-democratic society here in Northern Syria. In this way we see people coming to Rojava to participate in either the civil or military structures of the Autonomous Administration of North and East Syria (AANES) not as criminals but as honorable people fighting against injustice.

Make Rojava Green Again’ has already been affected by repression through the shutdown of the Kurdish publishing house Mesopotamya by the German state and the confiscation of more than 10.000 books, including the self-titled book of our campaign It seems that the governments of many European states are afraid of people seeing the reality and talking about the Revolution in Northern Syria. We see the participation of international activists from all around the world as important and meaningful.

We call on everyone to continue supporting the people in Rojava and the whole of Northern-Eastern Syria. At the same time we demand that the governments change their hypocritical stance against AANES and finally stop their support of the authoritarian regime in Turkey, which is directly threatening this democratic project through its support of reactionary Islamist forces in the Middle East.

You can find more information about Anne Dalum’s case in the attached translation of a Danish newspaper article. It was originally published in the Danish newspaper Politiken.dk on March 3 2019 and was written by Frank Hvilsom.

We want to clarify that the translated article below is not representing the opinion of ‘Make Rojava Green Again’ and is also containing false information. YPG/YPJ are described as military arms of PYD. The PYD is one of many political parties in the region. The YPG/YPJ are the self defense forces of the society and like this widely recognized by the whole population.

33-year-old Anne wanted to rebuild Syria, but then the police knocked on the door and took her passport 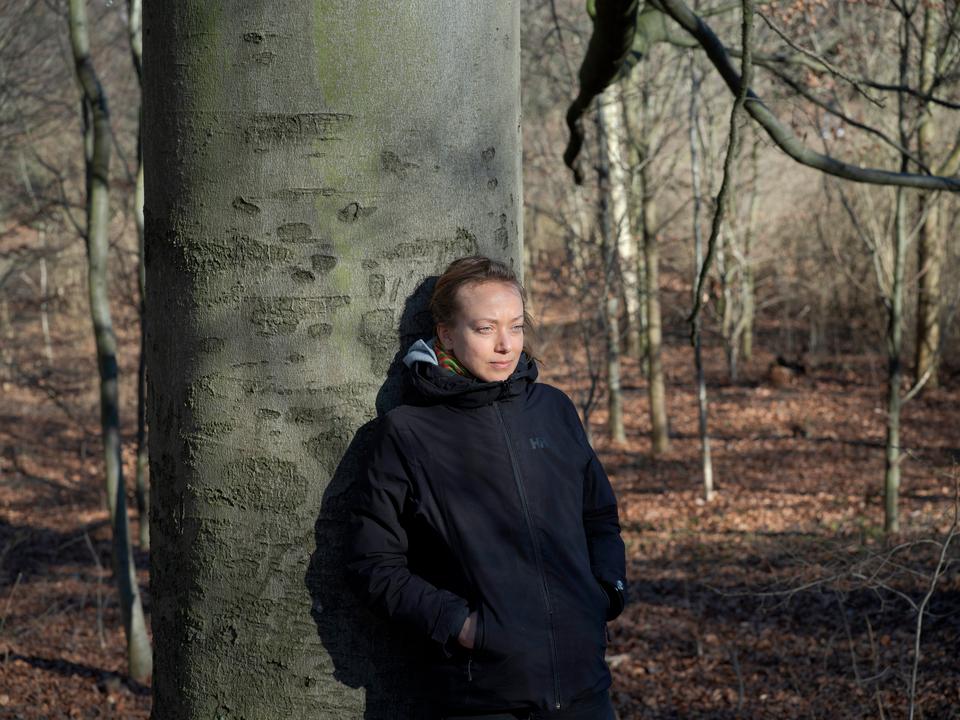 Traveling to the Rojava region in northern Syria and participating in a reconstruction project is not a creditable purpose [anerkendelsesværdigt formål, literally ‘purpose worthy of recognition’], says the Copenhagen Police. This passport revocation is the first of its kind to be tested in court.

A Danish woman has had her passport revoked and gotten a travel ban for a year when she wanted to travel to the Rojava region in northern Syria to participate in the reconstruction project Make Rojava Green Again.

The woman, 33-year old Anne Dalum, had bought the ticket for January 7, but the day before departure Copenhagen Police knocked on the door to her residence and revoked her passport.

It happened by referring to the tightening of the Passport Law in 2015, which among other things were supposed to help prevent the recruitment of foreign fighters into armed conflicts.

The revocation has shaken this woman.

“It was never my intention to go to Syria to go to war. I wanted to participate in the civic work to rebuild the Rojava region. Make Rojava Green Again is working with ecological restoration, wind use and reuse of water,” said Anne Dalum.

She has made no secret of her sympathy for the reconstruction efforts and has mentioned it on Facebook.

The Syrian civil war has never spread to the area in question.

To be tested in court

It was revealed at the hearing that the police apparently does not suspect Anne Dalum to participate in an armed conflict. The prosecutor from the Copenhagen Police, Sabine Mosegaard Sørensen, declared that the very presence in the region and the very purpose of the project is not creditable.

Copenhagen Police brought a statement from the Danish intelligence services PET that a person traveling to Syria will pose a danger to national security and be a significant threat to public order unless the person has a creditable purpose.

Subsequently, the prosecutor did not want to comment further on the case.

Questions about the purpose of the law

Anne Dalum’s lawyer, Erbil Kaya, calls the case unusual. He does not believe that she should be subject to the passport law. “The purpose of the law was to stop radicalization, so people subsequently do not become a problem.
This is something else. She does not want go to fight. Neither are there any information indicating that. She wants to travel for humanitarian reasons. She wants to go down there and help. Is the law intended to stop her if she wants that?”, he asks.

In the preliminary work to the passport law, which came into force in January 2015, the focus is specifically on the ISIS fighters, holy warriors and to stop people who go out to fight, and thus may pose a threat.

Justitia out with a warning

In a hearing in 2014, the legal think tank Justitia warned that the tightening of the passport law could lead to a situation like Anne Dalum’s.

According to Director Jacob Mchangama, he remarked back then that the scope of the law was vague and should be qualified. “We problematized the required suspicion in the decisions and said that there should be clearer evidence of whether you pose a danger. And also that a travel ban should require weighty reasons. We warned that more or less loose utterances on social media could lead to a risk. That’s exactly what happened here,” he says.

Erbil Kaya has previously appeared for two other people, Joanna Palani and Martin from Esbjerg, which he’s called, as the surname is not public, both of which have previously been deprived of their passports.

In both cases they had openly declared that they would travel out to fight against the Islamic State. Joanna Palani is today serving imprisonment for violation of the travel ban. The case at the court in Frederiksberg has not yet been scheduled, but is assumed to be completed before the summer.