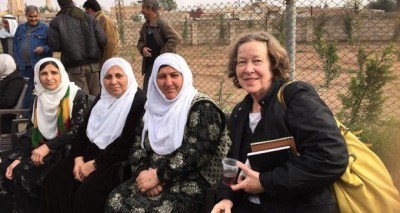 I was invited to participate in the Ecology Assembly in Amed (Diyarbakir), which met on February 28. The organizers wanted me to explain Bookchin’s thinking about ecology.  Unfortunately I wasn’t able to attend personally, but I wrote a message to that effect and added some of my own thinking about cities as an ecological issue.  –Janet

Congratulations on the creation of the Amed Ecology Assembly—I wish I could be there with you, to speak about ecology and Murray Bookchin. Thank you for inviting me to send this message. I will summarize his work on ecology and then make some concrete suggestions that may be useful for you toward the creation of ecological Democratic Autonomy in Bakur and Rojava in the coming years.

Bookchin, as you know, was a social ecologist, which means that he saw ecology in social terms and he stated writing about it in the 1950s. Unlike other nature-minded people who revered wilderness, he thought ecology was indissolubly tied to social organization and proceeded on that premise.

He started writing about ecology just after the Second World War, when large-scale, industrialized agriculture was just emerging. He saw that small farms were giving way to large factory farms; that traditional farmers with a connection to the land were being replaced by capitalist enterprises that employed farm laborers—employees; that traditional agricultural lifeways, which valued the local rural community, were giving way to the drive for profit; that diverse crops, farmed in rotation, were giving way to monocultures, subject to pest infestation; that as a result pesticides were being used widely; that local farms, where crops were consumed by people living nearby as needed, were giving way to long-distance food transport; that that required chemicals to be added to food like preservatives and coloring agents, to store it when it wasn’t immediately consumed. Many of those chemicals, it was just being discovered, cause illnesses in human beings, including cancer.

Now, sixty years later, all these problems are familiar, and much of great usefulness to you has been written about the problems of capitalist, chemicalized agriculture and need for organic farming. Bookchin argued starting in the 1950s the solution was to decentralize agriculture and indeed all of society, to get break up the large industrial farms and replace them with many small farms. That way farming could be small scale, integrated to the society; crops would be grown close to where they would be consumed, so that no preservatives would be needed; that crops should be diverse and rotate again, so that monocultures could be eliminated; and farming should be restored as a respected practice, with farmers feeling an affinity to and pride in working the soil.

I don’t know how much you are being invaded by industrialized capitalist agriculture, but if you are, it’s important to resist it and hold out for small-scale organic farming and traditional practices. I think you have some ideas about how to do so with the creation of sustainable eco-villages.

Just as Bookchin wrote about agriculture, he also wrote about a parallel development in cities. He argued that cities, too, were becoming too large and industrialized, dehumanizing people who lived there with anonymous office work, the stress of harried city living, and depoliticization. He thought that in the large new metropolises, the diverse communities and neighborhoods that give cities vitality and liveliness were being eliminated by centralization. The urban social fabric was being torn to make way for highways and parking lots for automobiles. Driving cars was more important than walking, and the needs of cars were more important than the needs of people, so cars were accommodated. Gigantic new cities, like gigantic new farms, were monocultures, dehumanized. And much as the chemicals in capitalist agriculture were damaging human health, so too were gigantic cities polluting the air and water, harming people’s health as much as chemicals in food did. He thought people would soon reach the limit of what they would tolerate, in terms of these insults to their health and environment, both in agriculture and in urbanization, and would rebel.

They would demand that the gigantic cities of industrialized urbanism be broken up into human scaled neighborhoods so that a rich ethnic diversity would once gain make up an urban tapestry. In neighborhoods and villages, people could feasibly create the kind of democratic self-government through citizen assemblies. And in those assemblies they could make decisions to create a healthy society, one that didn’t use food chemicals that cause cancer, and didn’t pollute the air and water through other kinds of chemicals.

Furthermore, cities consumed enormous amounts of energy, which meant they required power plants that ran on fossil fuels: coal and natural gas, as well as petroleum. But in 1965 he wrote that that was producing a crisis called “the greenhouse effect” (what we call global warming today). In a few hundred years, he wrote back in the 1960s, the greenhouse effect would make the planet too hot for life as we know it. Since fossil fuels were creating this greenhouse effect, he said, we have to get off fossil fuels, and use renewable energy—solar, wind, and thermal power. And if those technologies can’t power gigantic cities, then we have to decentralize cities, to break them up into small-scale neighborhoods and villages, which are more suitable for renewable energy.

Decentralization was imperative, then, he argued, for these energy reasons; for health reasons (chemicals and pollution); and also for a broader moral reason: that people are more important than the profit of a few. That people’s well-being is more important than profit of a few. And that democratic self-government, taking power away from the greedy economic elites and put it in the hands of people, is an ethical good in its own right. It’s an end in itself, a fulfillment of natural evolution toward complexity and freedom. That’s why he called his big book “The Ecology of Freedom.”

In Bakur and Rojava, you too could find your traditional cities becoming gigantic. You could find your neighborhoods homogenized and disempowered, your city government centralized, your workplaces capitalized, your vibrant political culture reduced to docile employees punching clocks at boring jobs day after day. The change can happen little by little, without people even noticing it. So it’s important to stay alert and to prevent it, even little by little, and build an ecological society even with small steps.

Rojava runs on diesel, from its oil wells, and it’s dirty and sooty. Right now, due to the embargo, Rojava lacks the resources to develop solar. And maybe you have similar problems in Bakur. As one part of democratic autonomy, you could think about adopting solar energy. You have plentiful sun. Solar panels are inexpensive these days they could power single buildings or entire neighborhoods. I think you should consider embedding it into your infrastructure as much as you can.

Start farming in your urban neighborhoods. Set aside areas for community farms, so that people can farm in the city. Also, trees are very important—not just for beautification. They cool cities in the summertime. They help purify the air. They help keep people sane and calm and civil toward one another. They are one of the best, simplest ways to counteract climate change. Plant trees, everywhere you can, in parks, along streets, in rural areas.

In my opinion, one of the most important ecological issues of all is transportation. Specifically, we have too many cars. People love their cars, probably as much here as in the United States. But they are a real problem. They make city air hard to breathe by generating pollution and smog. And they are an ecological disaster because they produce greenhouse emissions.

But the problems are more than that. When cars are dominant in city streets, they can become harmful to vital, livable, decentralized cities.

They do it by ruining neighborhoods for people. They have to be parked, so people rip up good buildings that could be used for housing or workplaces, and pave over flat areas for parking. And they’re socially isolating. When you’re driving a car, you don’t’ encounter your neighbors and have a conversation. They endanger to pedestrians and bicyclists. And finally, they’re not even efficient as a means of transportation in a city, because they create traffic congestion and then everyone gets stuck in traffic and has to wait. So it’s both a social and an ecological issue to keep cars under control, to keep them from dominating streets.

But people get dependent on cars for a reason. They need them to get from home to work, because there’s no alternative. So it’s an ecological issue to reduce the need for cars.

Make it easy to walk. Design streets for people, not for cars, and keep the streets safe for people. Instead of building more roads for cars, build sidewalks. Turn certain streets over to walking and bicycling—ban cars from them. Create car-free zones. Create green networks—interconnected green areas that make it pleasant and easy for people to walk or bike through the city. All these things are being done in other parts of the world now, to reduce the need for cars. You can do it here too, or maybe you are already.

Encourage bicycling. Build bike lanes. Tear up big streets, or transform driving lanes into bike lanes. All this will support decentralization and democratic autonomy. Walkable and bikable neighborhoods are the essence of community—that’s where people meet, where you see each other face to face.

And it’s important to think about public transportation. I didn’t see any in Rojava—everyone drives cars. I know that resources are scarce, because of the embargo, but it’s important to start bringing in buses, and eventually trains, light rail, streetcars. People need cheap or free public transportation, within cities, so they don’t have to drive to the walkable neighborhood on the other side of the city. And crate public transit between cities.

Don’t be afraid of dense population in your neighborhoods. Density is good because it makes public transportation financially possible. It’s better to build up existing areas than create low-density suburbs out in the countryside that make people dependent on cars.

In the United States we have too many, and too many highways, and too many parking lots. We have to undo car dependency. Fortunately young Americans want to move away from car ownership and from driving, but they’re finding it difficult because so much of the American built environment was organized around the automobile.

Build walkability and public transit into your constructed environment from the outset. These are my recommendations for any urban ecology effort. Working with renewable energy, urban farming, walkability, and public transportation will help you support neighborhoods, and decentralization, and ultimately democratic self-government and democratic autonomy. I wish you success.

Thank you for inviting me to contribute. If you need more information about anything I’ve said, please contact me.