From Rojava to Hambi: resistance! 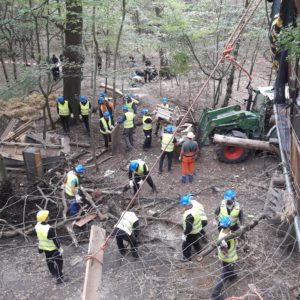 Hambach Forest in Germany is one of the last remaining primary forests in Europe. It is threatened by the mining conglomerate RWE who wants to cut it to enlarge a lignite mine that already occupies the surface of more than 11’000 football fields. After the chainsaws passed, only 20% of the forest remains today. For 6 years, the forest has been occupied by activists who resist its planned destruction.

In the Hambach forest, the brutality of capitalism appears in all its cynicism. A 12,000 year old forest has been razed to enlarge a mine that is part of one of the most polluting complexes in Europe. Even as the climate emergency becomes day after day more obvious and politicians are saying a lot of hot air in international summits, the first European economic power that pretends to be a model of ecology when it closes nuclear power plants continues to massively use coal energy.

This proves to everyone at least one thing: the governments of European liberal “democracies” have no intention of fighting climate change and their symbolic actions to paint capitalism in green are only hypocrisy. We saw with our own eyes the desolation of this monstrous open-air mine, we saw the brutality of the german state’s armed hand defending the interest of the rich and the courage of the defenders of these lands. In Kurdistan too, states destroy nature, whether through productivist agricultural policies, colonialist policies or military purposes. The forests of Rojava have been razed by the Syrian regime to make way for monocultures. Today the desert is advancing more every day.

Whether RWE, Vinci, the Baath regime or the Turkish state, those who destroy the planet to satiate their thirst for predation and domination will find our resistance in their path.

We salute from Rojava the resistance of our comrades who are fighting in the forest of Hambach and we call everybody who can to join them.

From Hambi to the ZADs in France and elsewhere, from Rojava to Chiapas,
from North Dakota to the Brazilian countryside, let’s continue the
resistance against barbarism and build other worlds!