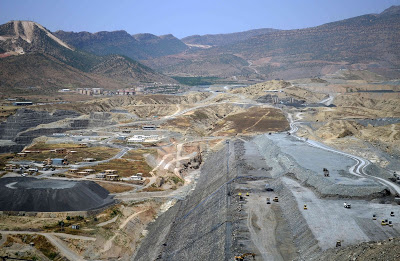 by Ercan Ayboga, first published by Ercan Ayaboga
June 2018
Ecology is one of the three pillars of the paradigm of Democratic Confederalism, the political-theoretical concept of the Kurdish Freedom Movement. Besides democracy and gender liberation, ecology has been mentioned explicitly as a dimension in this concept since 2005. However to date, ecology is less discussed and practiced than the two other pillars.

Ecological destruction and exploitation in Kurdistan
With the widespread introduction of capitalism to Kurdistan in the 1950s came a systemic and destructive exploitation of nature. The four colonialist states -Turkey, Iran, Iraq and Syria – started to plan large energy, mining, agriculture, infrastructure and other investment projects whose implementation led to exceedingly grave ecological destruction and exploitation1. This is caused, amongst other factors, by the capitalist economic model, respectively low ecological and social standards in the implementation of the many projects as well as by the simple fact that Kurdistan has the de facto status of a quartered colony. While keeping the colonial status, the hegemonial states introduced step by step, using economic as well as military measures, capitalist relations into the societies of Kurdistan. In the 1970s the construction of numerous large projects – particularly dams, oil-drilling and mining – had been realized through the exercise of the hegemonic power of the highly centralized states in the four parts of Kurdistan under the pretext of progress. After the first preparation work in the 1960s, agriculture started to be industrialized in the 1970s, particularly in West Kurdistan (Rojava) and North Kurdistan (Bakur), later in South (Başur) and East Kurdistan (Rojhilat).
One result of these policies was that communal and solidarity-based relations became weaker in the society of Kurdistan. The infrastructure projects and investments were designed and implemented with absolutely no consultation of the local population and through an authoritarian approach, were in the interest of the colonialist states and the colonialist and collaborative Kurdish upper classes and aimed a profit maximization through capitalist modernization, oppression and a deepening assimilation. While this development was still slow in the 1950s and 1960s, it took on an accelerating character in the 1970s. As a result of the implementation of large infrastructure projects in rural areas and the consequent displacement of hundreds of thousands; the industrialization of agriculture; the continuous economically-driven migration of rural people; rapid urbanization; industrialization; and the colonialist wars against the population as from the 1980s; society has lost for a big part its characteristics of solidarity and communality. The main characteristics of the pre-capitalist societies were communalist approach and solidarity on decision-making, economy, sociality, culture and others issues, but different intensity of feudal and conservative forms were also present. Since the 1990s, the number of implemented large projects, as well as the livelihoods of people and economic relations, experienced grave changes. The surviving elements of the subsistence economy and local circles of economy were marginalized and Kurdistan became fully part of the “national market” of each state and entered the neoliberal global market.
The former times were certainly full of hierarchy, patriarchy and discrimination, but the transition to capitalism was a brutal break in the social and historical development and in a certain way it has even deepened societal sexism and patriarchy. To understand what has been diminished in these decades, the following approaches and characteristics of communalism and solidarity were eroded between the 1950s and 1990s. Typically:
Kurdistan belongs worldwide to the countries where until recently capitalist modernity2 was weak and solidarity and communal structures in the societies were still existing in a significant way. Today the older generations of Kurdistan remember quite well how life was until the 1960s or 1970s.
There is no objective to romanticize the life several decades ago, but nevertheless there was a significant solidarity and sharing in the society and not everything was valued monetarily; life and commodification3 was not materialized as it is the case today.